Siden and Juno has courted each other for several weeks now, but they haven't been particularly interested in the new nest box. Even so, I have provided them with different kind of twigs, if they should feel like trying out the new spot.

So, for the last few days the activity has gone from trying out the odd twig to intense nest construction. It seems as if building the base take the longest time, while forming the middle and top parts goes quicker. Or at least with a higher frequency. Yesterday I went over our neighbour to get some thinner, yet tough, twigs and Siden and Juno just went crazy - spending the whole afternoon carrying twigs to the box, and arranging them inside.

From below, it doesn't really look like anything more than a pile of twigs, and every year I wonder what it looks like from above. So tonight, when Siden and Juno perched outside in the dark aviary, I decided to sneak up the ladder with a camera. The ladder has been standing there ever since I built the new box, but I haven't climbed it since breeding season started. To say that they don't want you to get close to their nest is a grave understatement, and as I had left the light on, they could come inside at any time to see what was going on. I really didn't want to betray their trust.

But I was lucky, and...wow! The blurry, tilted picture doesn't do the architects justice, because the bowl in the middle was so evenly shaped and so neatly knitted that the surface was totally smooth. I could also see patches of wool tucked into it, and it looked...cosy! 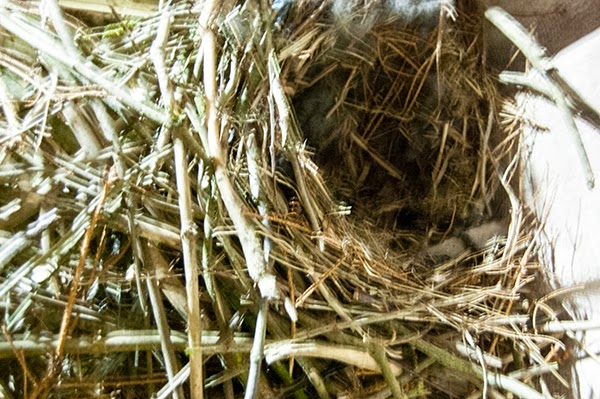 Last year, we believe that Juno laid her first egg on March 10th, and a week ago I would never had thought that she might repeat that this year. But know I'm not so sure.