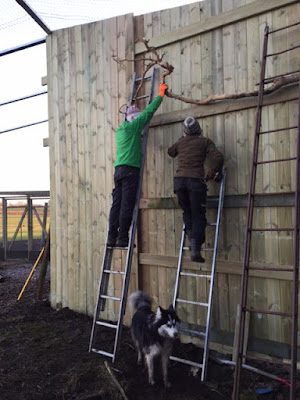 Breeding season is coming up and there is so much to do! Once the females are on the nest we cannot work with the pairs until the chicks have fledged - a period of about 4 months. Another thing we wanted to do before breeding was to divide the largest aviary, housing the pair Rickard and None and the two females Embla and Tosta, so all birds get equally big space during breeding season. Once the courting behaviour starts we separate the breeders from the non-breeders to avoid any aggression.
At the same time we have been sprinting to end the experiments - a long-term planning study and a study on string-pulling involving all six birds - so it has been difficult to decide when to start the new construction.
However, as our birds are older and more used to different things the construction work went surprisingly smooth, and the ravens were happy to try out the new shelves and branches only after a day or two. The young females Tosta and Embla were also content with the new part and are separated from Rickard and None from now on. Hopefully we will be able to let them together again when autumn comes, but as ravens are territorial birds once they form pairs, we will have to wait and see. 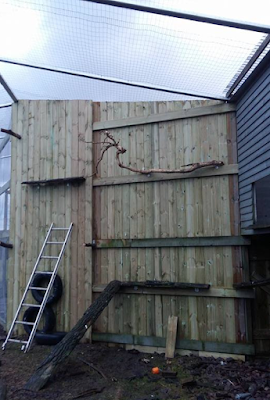