For everyone working with animals it is no secret that you need lots of time, patience and inventiveness. Often it is details that you did not even think of, that causes the biggest problems when you want to work with the animals. For crow birds it usually is the"neuphopia" that slow things down - the fear of unfamiliar things. It could be new objects, new people, familiar people with unfamiliar clothes - but also different parts of the aviary which suddenly (from the human perspective) becomes scary, mayby due to shifting shadows, the wind, or maybe due to details that our human senses do not even percieve.

For one of the experiments performed at the moment, an apparatus is mounted on a wooden box to make the apparatus stay in place while the raven is operating it. For some reason, Siden is afraid of the box, even though it has been there since that particular part of the aviary was built. The other ravens are absolutely fine with it and we havn't yet figured out what causes his fear.
However, to try a different approach I introduced a new base for the apparatus yesterday. A big heavy log with a flat surface - new to the ravens but still alike many other wooden items in the aviaries - but placed slightly different from the box. 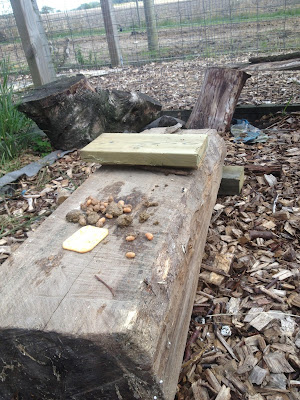 This picture might not seem much to the world, but today Siden dared to eat from the log - even with one leg on it! I didn't want to spoil the moment, though, by taking out another scary thing - my mobile phone, so the picture is without ravens. Hopefully he will accept the log within shortly and jump up and down on it like his spouse Juno - but time will tell.

Today there was also some other progress in training one of the young females - Tosta. She is the only one of our ravens that still don't know how to exchange items with us humans. Exchanges is something that is often used as part of different experiments, and our other young female, Embla learnt it before summer. Until now Tosta has been touching an item with her beak to get a reward, but she hasn't been sure about the next step - to push the item towards me so it falls down in my hand. But today she was, and happily filled her pouch with rewards!

Eventually she should be able to get the item from somewhere in the aviary and hand it to me for a reward, but I expect that step to take some more time. So for now I'm happy with this, and Siden's foot on the log.